This post is sponsored by Color it Candy.  As always opinions are 100% my own.

When we had B over 7 years ago Gender Reveal Party Ideas were not a thing.  We found out that we were having a girl the old fashion way in the ultrasound room with the tech.  I remember being so excited.  The tech wrote It’s a Girl on the ultrasound print out and we quickly shared the photo with all our friends and family on Facebook.

Fast forward to now and a gender reveal party felt like a must.  After a long 4 years of struggling with infertility we wanted to celebrate this baby as much as possible.  When I shared it with my dad he quickly asked What is a baby gender reveal party?

What is a baby gender reveal party? Create a Theme for your gender reveal party There are lots of adorable party ideas.  You can go from a simple pink and blue party to bows or bowties, cowboy or cowgirl, lashes or mustaches, cheerleader or football player, what will it bee them.  The options are really endless.  Since I love a simple design we went with the classic pink and blue.  Thanks to Color it Candy and lots of balloons we were able to transform our hotel room (we had just sold out home and were living in a hotel for a month) into a gender reveal party destination. I know traditionally they say invitations should go out 6 weeks in advance, but I have been feeling so sick we decided to make it a last-minute decision if we were going to make this a true gender reveal party or an intimate get together with just our immediate family.  So, we did a digital invite.

Find out the Gender of your Baby

Traditionally at 18 to 20 weeks you can find out the gender of your baby with an ultrasound.  If you do that you can ask the nurse to write the sex of your baby on a sheet of paper and seal it in an envelope.  Now thanks to modern medicine you can learn the gender with a simple blood test between 9-12 weeks.  So, you will want to confirm with your doctor.  The test can take anywhere from a week to two weeks to come back.  We scheduled our baby gender reveal party for the 2nd weekend just to be safe. When I originally started planning the party I envisioned having a simple white cake, cupcakes and painted cookies.  I was shocked to find out that the painted cookies were crazy expense.  That is where Color it Candy saved the day. 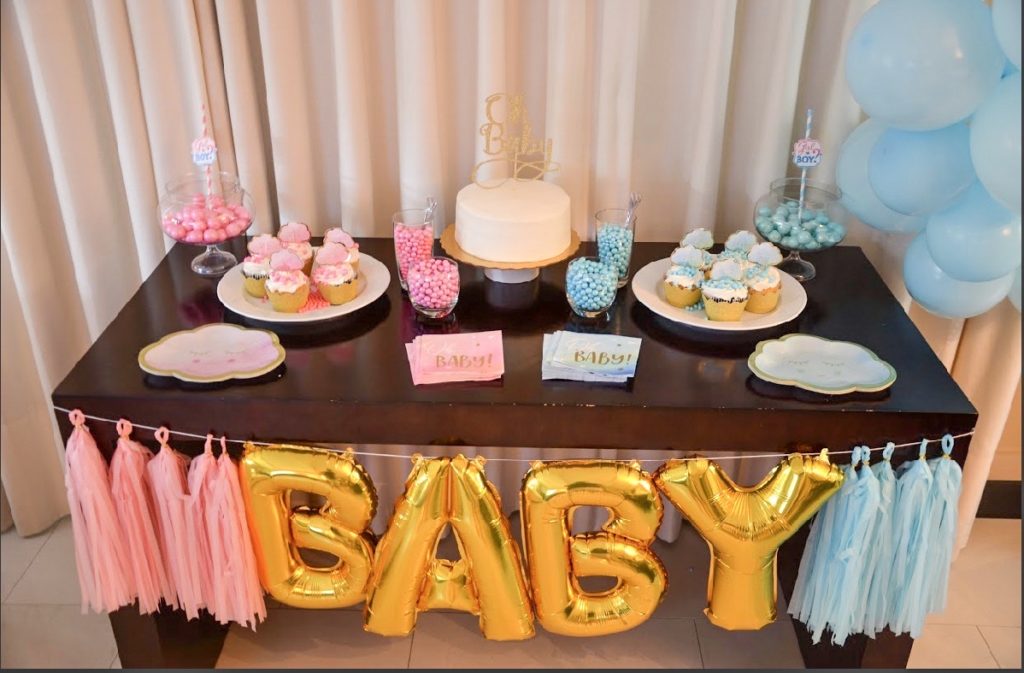 Instead of having the cookies I added their candy and it truly elevated the dessert table.  We did a pink and a blue side of the table with the white cake in the middle.  We order the following candy in both pink and blue. 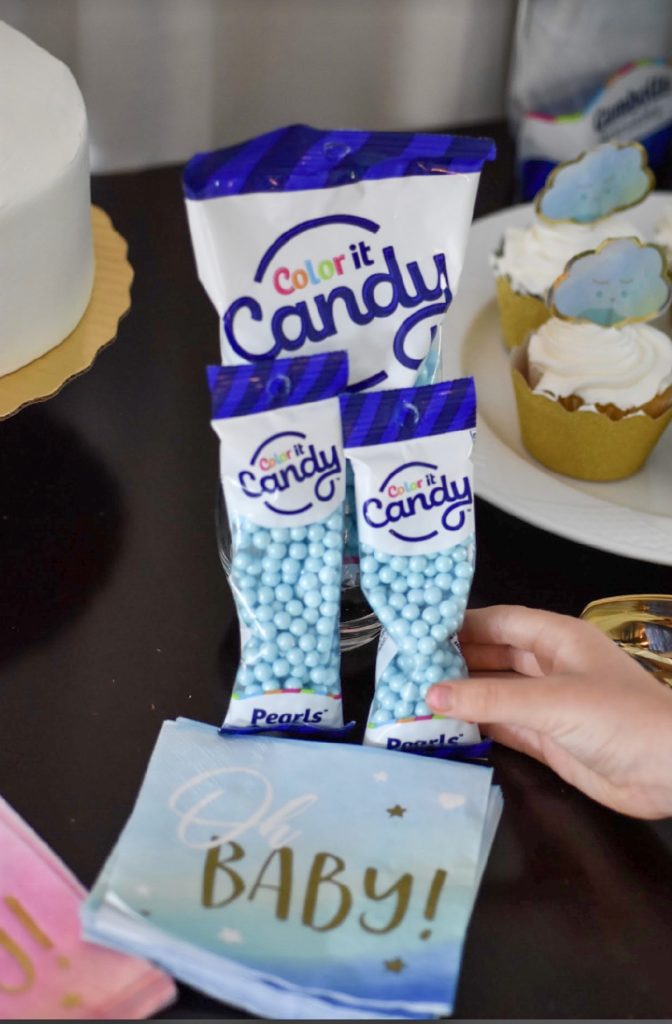 How adorable did this turn out!!! 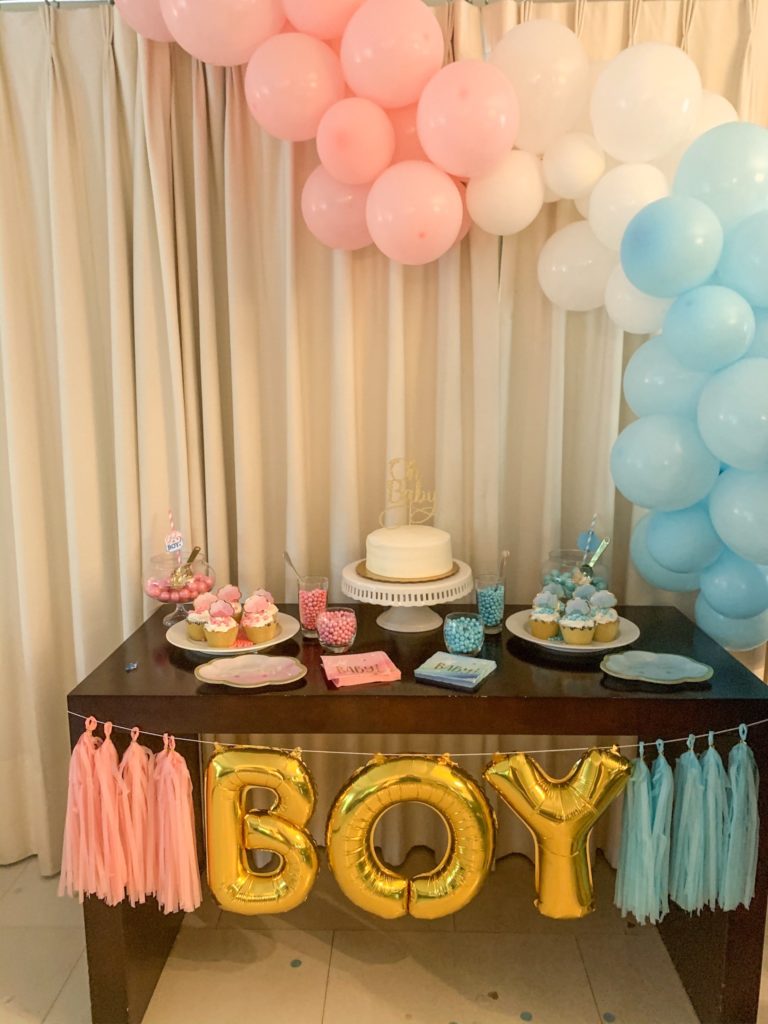 There are so many fun ways to reveal the gender.

A friend had a great tip which was to ask for the envelope back so that you can confirm the person who helped you selected the right color. 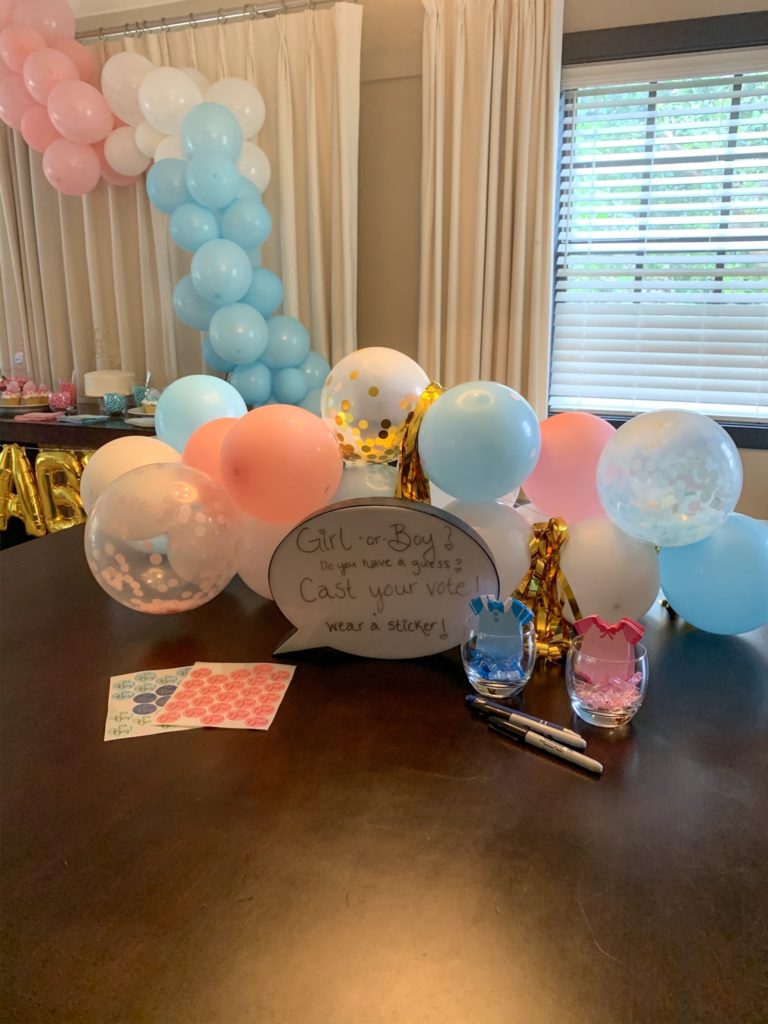 I am so grateful for my friend Jen who encouraged me to go to the store and buy some gender reveal party games.  There are lots of options.  We kept it simple and had a place where guests could select a pink or blue card, write their name of the color that coordinated with your guess and then hand it on a string.  After they guessed they could select a sticker to wear so everyone knew if they were team girl or team boy.  It ended up to being about 50/50. Kurt and I had fun at the end of the night going back to see everyone’s guesses.